Here is our public report of the first year of our work. 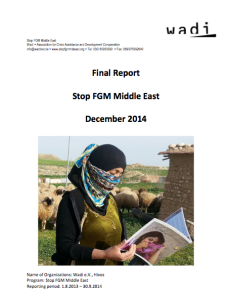 We thank our founding organizations Hivos and Wadi e.V. who made this initiative possible. We also thank all the activists who participated in our conference and pushed the issue of FGM in their countries with tireless efforts and all others who contributed to bringing the issue of FGM in Asia and the Middle East into the public, especially numerous journalists many of whom taking the risk of tackling a taboo subject. We are alse very grateful that Unicef is now supporting our efforts. Last we like to thank all individuals in governments and religious institutions who were open to consider the subject and start debating it in their institutions.