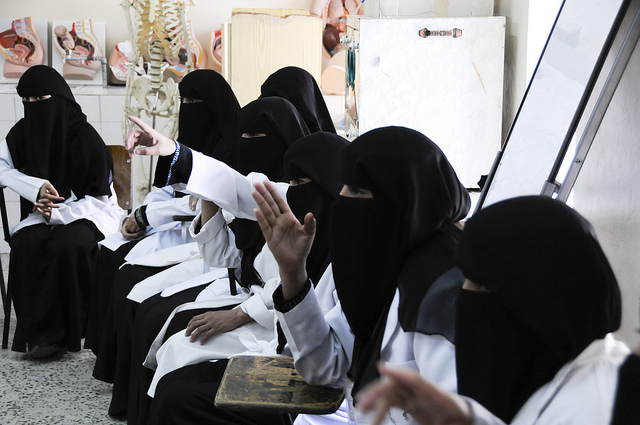 Plenty of studies but little action

Yemen is the only Middle Eastern country, where the prevalence of FGM was detected early on. Already in 2001, the US State Department published a Report on Female Genital Mutilation and Female Genital Cutting which cites several studies conducted by the Yemeni goverment.

According to the Yemen Demographic Mother and Child Health Survey of 1997, 23 percent of Yemeni women have undergone FGM. In the sparsely populated Red Sea and Aden Coastal regions, this percentage rises to 69 percent, compared with 15 percent in the populated highlands and 5 percent in the plateau and desert regions. Almost all procedures reported (97 percent) occurred during the first month of life. The usual tool is a razor blade, scissors were used 20 percent of the time. According to the medical anthropologist Soheir Stolba, Ph.D., another practice is common in the coastal regions, known locally as al-takmeed. On the fourth day after a baby girl’s birth, her mother or an older female household member prepares a compress to use on the genitalia. The compress is a soft cotton material inside of which heated salt and/or sand is placed, along with oil and herbs.

A mother heats the compress and places it on the infant’s genitalia, pressing repeatedly for about an hour. This continues for a period varying between 40 days and four months. The procedure’s physical effect may affect nerve endings and decrease the sexual excitement of the girl or woman on whom it’s performed.

Studies by the Ministry of Public Health revealed that over 96 percent of women in Hodeidah, Hadraumaut and Al-Maharah had undergone FGM while Aden and Sana’a city were 82 percent and 45.5 percent, respectively. Trained medical personnel had performed only ten percent of the operations. Women who specialize in ear piercing, birth attendants, rayissas (women skilled in female circumcision) and relatives carry out most of the procedures.

Nearly 48 percent of the Demographic Survey’s respondents believed it should be discontinued. Urban and educated women, despite a higher rate of circumcision among them, were more likely to oppose the practice. With 62 percent of women being illiterate and 30 percent of men, Yemen has the lowest education rate in the Arab world. While one-third of FGM-supporters gave religious obligation as a reason for FGM, one-third of the opponents believe it to be anti-Islamic. An Analytical Study of FGM in Yemen by Gender Studies and Researches Center at Sana University found similar prevalence and attitudes in 2008.

The Yemeni government has taken some effort to combat FGM during the last decade. Yet, women’s rights activists criticize them to be by far not enough. The Minister of Public Health, and health care providers have publicly decried the practice. In 2001, the Ministry sponsored a two-day seminar on “Female Health” which marked the first time FGM was publicly discussed. Nearly 150 academics, health professionals, government officials, donors and clerics attended. A plan of action to reduce the incidence of FGM in Yemen was established at the conference. A ministerial decree effective January 9, 2001 prohibits the practice in both government and private health facilities. Yet, activists say the law is poorly implemented.

Khalil Foud Ba-Matraf, an activist of Y-Peer, demanding the goverment to implement the law against FGM

In 2008, a national plan to reduce FGM to 30% by 2012 was initiated. Yet, the main activity of the government seems to be to call on religious authorities to condemn the practice which some them have done, others not. A draft proposal for a Safe Motherhood Law that includes prohibiting FGM was submitted to parliament in 2009, but the follow up for its approval is ongoing. According to the government not enough studies have been undertaken and it wants to first verify if the practice still exists.

Yet, even though there were only small-scale government measures against FGM and campaigns attitudes have changed since the goverment acknowledged the problem. A study from 2013 by the Medical University of Tokyo shows a small, yet clear decrease in the percentage of girls having undergone FGM from 29.3% in 1997 to 22.4%. In 2003 more women had heared about FGM showing that awareness raising has taken root. The percentage of women supporting the practice had decreased from 41.5 to 32.3%, that of husbands from 29.8% to 21.1%.

Analytical Study on FGM in Yemen, Gender Studies and Researches Center, at Sana’a University in cooperation with Yemeni Women Union in 2008