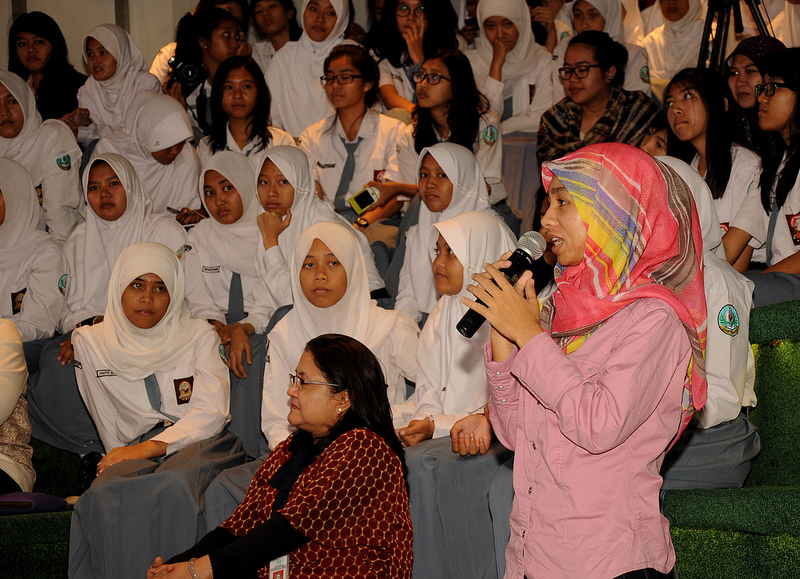 Activists adress women issues at an event in Jakarta – credits: US embassy

Female Genital Mutilation has been documented to be practiced in Indonesia since the 17th century. During the past 20 years a number of  regional studies have found a prevalence of more than 90 percent in some areas. It occurs in parts of East, Central and West Java, North Sumatra, Aceh, South Sulawesi and on Madura Island, as well as in many other parts of the archipelago.

A large scale study by USAID in 2003 found that 86-100% of girls aged 19 reported to be “circumcised” (number of households surveyed: 1694). The practice is common in all eight regions surveyed in the study but varies significantly. Some people practice a symbolic type of circumcision which involves scrapping, stretching or pinching of the clitoris, usually with no blood drawn. However, two thirds of all women reporting to be “circumcised” had undergone more than symbolic forms: 49% incision and 22% excision of the clitoris.
Among the symbolic forms is also the pricking with a needle, in this study it constituted less than 4% in the region where it is was most common. However, it may be more common throughout the country as it plays an important role in the discussion about FGM in Indonesia. Such “pricking” can cause harm, as experts affirm. “Even a small wound on the genitals can lead to sexual, physiological and physical problems,” Artha Budi Susila Duarsa, a university researcher at Yarsi University told IRIN.
Role of Islam
All women interviewed in the USAID study consider FGM an Islamic practice, most of them calling it a religious duty and many affirming that an uncircumcised woman is not Muslim. In a field study by the charity Islamic Relief Canada from 2016 a majority of women even thought it to be a religious obligation. While most women reported that usually baby girls are cut in the first 24 months of their life, there were also cases of adult women submitting themselves to the cutting when they converted to Islam or before Hajj (Islamic pilgrimage). As one circumciser who the authors spoke to put it: “Sunnah circumcision [religious tradition] is a must for every Muslim woman … Many Islamic teachers allow [FGC] because it existed since the time of Prophet [Muhammad] … It is dangerous if she is not circumcised; her religious duties like prayers and fasting are not accepted by Allah. If she is circumcised she is clean … If she is uncircumcised, it means that she has no religion.”
There is evidence to the assumption that FGM in Indonesia was introduced by Islam starting in the 13th century and did not exist as a cultural practice before. The procedure has much stronger religious connotation than in other parts of the world where it is practiced: Often girls undergoing the procedure have to recite a prayer, the piece of flesh cut is called daging charam (religiously proscribed flesh) and buried in a ceremonial way. The practice is absent in non-islamized areas.

Today, Indonesia is the largest Muslim-majority nation in the world with 88 percent of its people adhering to Islam and the majority of these adhering to the Shafi school of Sunni Islam – the only one of the four law school which describes female circumcision as obligatory (wajib) by Islam. Indonesia’s clergy supports FGM in its majority, while many human rights advocates voice their dissent. A vivid discussion about pro and con of FGM has been going on in the last years which has been picked up on by international media occasionally.

The Ulema pushed the government to allow FGM

Indonesia was also one of the first countries to ban FGM. In 2006, the government prohibited health officials to perform FGM because it considered it a “useless” practice that “could potentially harm women’s health”. However, the ban was quickly opposed by the Indonesian Ulema Council, the highest Islamic advisory body in Indonesia.

In March 2010, the Nahdlatul Ulama (NU), the country’s largest Muslim organization, issued an edict supporting FGM, while a leading cleric told the NU’s estimated 40 million followers “not to cut too much”.

In November 2010, the goverment gave in to the pressure by Muslim organizations and lifted the ban. Instead the Ministry of Health issued regulations concerning FGM. The new regulation authorises certain medical professionals, such as doctors, midwives and nurses, to perform it and defines the practice as “the act of scratching the skin covering the front of the clitoris, without hurting the clitoris”. The procedure includes “a scratch on the skin covering the front of the clitoris, using the head of a single use sterile needle” (Article 4.2 (g)). Following this new regulation Amnesty International called on the government to repeal the law.

FGM on the rise

Since the new regulation is in place numbers of FGM victims may be rising. “This will give doctors a new motivation to circumcise [girls] because now they can say the Ministry of Health approves of this, and the Indonesian Ulamas’ Council approves of it,” Jurnalis Uddin, doctor and lecturer at Yarsi University in Jakarta, told IRIN. “I think that doctors will use these guidelines to make money from circumcision,” Uddin said, adding that Indonesia’s poorly regulated medical practitioners often viewed medicine as a business.

Already in an article from 2010, Duarsa, the university researcher at Yarsi University in Jakarta expressed her concern that numbers of FGM victims could be rising after clerics had taken a strong stand in favour of the practice.

“We fear if it gets more outspoken support from religious leaders it will increase even more. We found in our latest research that not only female babies are being circumcised, but also older women ask for it,” said Artha Budi Susila Duarsa, a university researcher at Yarsi University in Jakarta.

According to one statistic 12 percent of babies born in hospitals, birthing centers and by government midwives are cut today. The assumption that a “medical” mutilation is the lesser evil, because of steril environment and a less harmful operation is thwarted by the findings of the USAID study in 2003 which found that trained midwifes practiced more invasive forms of FGM than traditional practicers ((68-88% of cases, compared to 43- 67% by traditional providers).

Another rather new phenomenon are the mass ceremonies in which girls are circumcised. Such events organized by Muslim charities have been on the rise since former dictator Suharto was ousted in 1998. Before female circumcision was more of a private matter. Such religious ceremonies could further increase the number of victims.

William G. Clarence-Smith: Islam and Female Genital Cutting in Southeast Asia: The Weight of the Past, Finish Journal of Ethnicity and Migration, 2008

Andrée Feillard & Lies Marcoes: Female Circumcision in Indonesia: To “Islamize” in Ceremony or Secrecy, 1998; in: Archipel 56