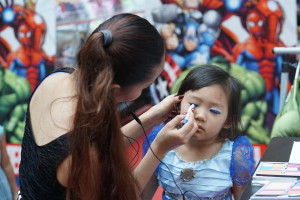 A Cinderella makeover without a fairy godmother by Benjamin Ho.sg

Rituals change despite similarities to other south east asian countries

Singapore is a multicultural society with strong Malay traditions. About 15% of the city’s population of not quite six million are of Malay origin. Thus to no surprise, reports about Female Genital Mutilation (FGM) in Singapore show similarities to other findings on the Malay archipelago in Malaysia, South Thailand and Indonesia.

No studies exist but the practice is reportedly widespread among the Muslim community and usually performed as Type I or Type IV FGM, cutting the clitoris or the clitoral hood (described as the size of a nail clipping, a quarter-grain of rice, a guava seed, a bean, the tip of a leaf, or the head of a needle).

Similar to other places in Southeast Asia, a change in ritual seems to have taken place in the last generations. As the Singapore-born Dutch intactivist Sya Taha writes, FGM in Singapore was traditionally performed as a rite of passage performed to ensure the girl’s virginity and control her sexuality, but changed into a custom performed on babies. Indicators for this development are reports from Singaporean women who know that FGM was originally performed at the beginning of puberty and every child which wanted to know about their sisters or cousins experience was objurgated for being too interested in sexual things. But then the age dropped and now usually newborns undergo the practice.

A “Mik Bidan”, the post-partum midwife, usually performs FGM on the newborn, but medicalisation is also reported. The midwife’s other duties include helping the mother to get back in shape after birth and teach her how to nurse the child. Another way to get FGM done and to ensure that “not too much” is cut away – which is a well known concern as far as anecdotal evidence tells us – is to visit one of the few Muslim clinics where female doctors offer to “circumcise” girls. One of them stated that she cuts five to six persons per day, emphasizing that not only newborns and girls of prepubescent age are brought to her but sometimes adult women also undergo this procedure. The cost of 17$ isn’t covered by health insurance.

Even though Singaporean Muslims are adherents to the Shafi’i school of Islam which views “female circumcision” as mandatory, views in Singapore seem to be much less dogmatic on the issue than elsewhere. Maybe it is because the Muslim community – which is likely to be the only community performing FGM in Singapore – is a minority. Quotes from Muslim mothers are spread across the internet where they state that “sunat perempuan” isn’t mandatory. So leaving your girlchild intact is more or less a question of opportunity and coincidence without threatening consequences. Since there has never been a scientific study on FGM in Singapore many inhabitants don’t know about this practice, either. When one woman asked a forum about this tradition and stated how shocked she was to find it happening in her circle of friends, many answered with disbelieve, surprise and denial: “Africa and the Middle East are one thing, but Singapore?!!! Someone should write an article, but I doubt it would get printed due to the censorship laws here.” (ladybug, 15.08.2002)

Several Articles were published in the meantime but information on FGM is still very, very little. Unfortunately, even the local women’s rights organisation AWARE repealed from their activities and possibly research on FGM in Singapore which leaves other activists with very little arguments in their hands. One blogger for example stated that she was shocked to find out FGM is performed in Singapore and that she hopes for a ripple effect sharing this news but apparently is unable to provide any more detailed information to support the pure acknowledgement of the existence of this human rights violation.

While individual statements and public discussions support the possibility that FGM is no big deal in Singapore and possibly even changes by itself into a practice that neither endangers a girls physical nor psychological health those impressions must be considered very carefully. Very few people make public statements about FGM in Singapore and probably the supporters of this practise are not among them. While every once in a while a journalist or activists calls out for a law against FGM, families from abroad bring their daughters to Singapore to get them cut. According to a BBC investigation half the clinics in Singapore are willing to carry out the procedure on British girls, no questions asked.

So even if it is true that FGM decreases in the population and even if symbolical practise increases among those who still participate in this harmful tradition, Singapore needs to put an end on the medicalisation of FGM in order to protect girls from all over the world and to prevent the local clinics and private doctors from performing heavier forms if demanded by the paying parents.

Beyond the Hijab: Blog Series on Sunat Perempuan, Febuary 2016

WADI and Aware organize first ever conference on female genital mutilation in Singapore, 9.1.2016