Wadi talks on Deutsche Welle about FGM in Asia

27.8.2018 The German women’s rights organization Terre des Femmes just came out with new figures about female genital mutilation (FGM): More than 65.000 women and girls are cut in Germany, 12 percent more than the last estimate. This rise is mainly due to an influx of refugees from Somalia, Eritrea and Iraq in recent years. Deutsche Welle TV spoke with WADI on the news in it’s English and German program about FGM in Iraq and Asia. 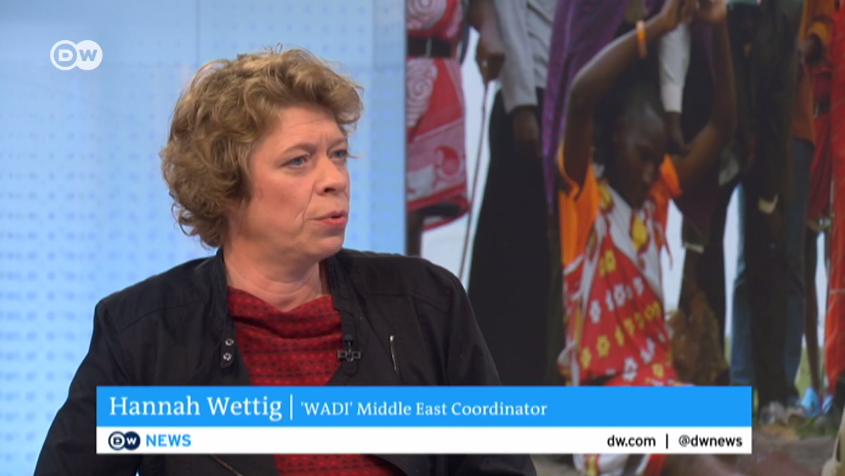 In the hamlet of Tirpaspyan, a loudspeaker crackles into life, summoning the local women to the village mosque. END_OF_DOCUMENT_TOKEN_TO_BE_REPLACED

Day of Zero Tolerance: Campaign in Kurdistan in danger

After a most successful year campaigning against female genital mutilation (FGM) in Iraqi Kurdistan and many countries in the Middle East and Asia, WADI has to announce that large parts of the campaign will not continue. END_OF_DOCUMENT_TOKEN_TO_BE_REPLACED

SULAIMANI, Kurdistan Region – The media campaign that helped lead to the 2011 ban on female genital mutilation (FGM) in the Kurdistan Region is being looked to as an example elsewhere in the region, according to the anti-FGM activist behind the plan.

“People look now at Kurdistan as an example. Our Kurdish material is being copied into Farsi. The awareness material is translated and gets used officially. The Stop-FGM-Iran homepage is online,” he said.

END_OF_DOCUMENT_TOKEN_TO_BE_REPLACED

Campaign in Iraqi Kurdistan: Paying a visit to a Mullah who promoted FGM

20.5.2015. By Stop FGM Middle East. The shock was great when the Iraqi Kurdish Xelk Media Network reported about a Kurdish Mullah promoting female genital mutilation (FGM) on May 8th. Not only did Mullah Ali Kalak stress that Islam allows “female circumcision” but he demanded it to be done for the wellbeing of girls, claiming non-cut girls would enter illicit sexual affairs. END_OF_DOCUMENT_TOKEN_TO_BE_REPLACED

END_OF_DOCUMENT_TOKEN_TO_BE_REPLACED

Video-Clip: At the doctor’s office

By Stop FGM Middle East. 4.2.2015. In the Iraqi Kurdish region a law against FGM is in place and all TV and radio-channels are airing information about FGM. This is part of a large-scale campaign against Female Genital Mutilation which is run by WADI and Unicef. Politicians, doctors, clerics, policemen and the media are supporting the battle against this harmful traditional practice. In this video-clip a doctor is explaining the harms of FGM to a mother seeking advice. END_OF_DOCUMENT_TOKEN_TO_BE_REPLACED

By Stop FGM Middle East. 4.2.2015. In this video-clip one of WADI and Unicef’s mobile teams arrives at a remote village. These mobile teams visit the Kurdish villages regularly educating about FGM and the law against domestic violence, but also discussing daily issues and needs of the population trying to find solutions. In the Iraqi Kurdish region all relevant actors are embracing a large-scale campaign against Female Genital Mutilation which is run by WADI and Unicef. Politicians, doctors, clerics, policemen and the media are supporting the battle against this harmful traditional practice. END_OF_DOCUMENT_TOKEN_TO_BE_REPLACED

Here is our public report of the first year of our work. END_OF_DOCUMENT_TOKEN_TO_BE_REPLACED