END_OF_DOCUMENT_TOKEN_TO_BE_REPLACED

Here is our public report of the first year of our work. END_OF_DOCUMENT_TOKEN_TO_BE_REPLACED

“Hannah Wettig, who manages the Stop FGM Middle East campaign for Germany-based nonprofit WADI and Hivos, pushes back on the notion of FGM as an “African problem” and criticized UNICEF’s reliance on national survey data. For one, she said, Middle Eastern women may be more reluctant to admit they have been through the procedure, as it’s more secretive than the public rite of passage in some African countries. In addition to Iraq and Yemen, Wettig said it happens in Asian countries that include Oman, United Arab Emirates, Iran, Pakistan, India, Malaysia, Singapore, Indonesia, the Maldives and the Philippines.”

13.6.2014. Hivos. For ten years, Hivos partner WADI has been campaigning against female genital mutilation (FGM) in Iraqi Kurdistan. Director Thomas von der Osten-Sacken finds that communities are slowly but surely turning away from this degrading tradition.

Not an ‘African problem’

The Iraqi-German human rights organisation WADI first came upon the harrowing consequences of FGM in the Kurdish Autonomous Region through its mobile teams. “At that time, it was thought that FGM barely existed in Iraq. FGM was seen as an ‘African problem’,” says von der Osten-Sacken. “Right now in publications people talk of about 140 to 160 million women who have been genitally mutilated worldwide. But Indonesia – the country with the largest Muslim population in the world – is not included, and it is estimated that about 80 percent of women are circumcised there. If you add Iraq, Iran, Oman, Yemen and Malaysia, you come to the conclusion that the number of victims of FGM is probably twice as high.”

END_OF_DOCUMENT_TOKEN_TO_BE_REPLACED

14 February 2014. The challenge that embracing shame poses to the longstanding perversion of honour, is the struggle for women’s human rights –  the realisation of which will result in the entire community’s advancement and healing.

The social construct and custom of honour maintains order for many societies in the middle east and Africa, south and central Asia, and the worldwide diaspora of these diverse communities. A woman, the physical manifestation of honour, embodies this involuntary burden through her every day actions and decisions – or lack thereof – from the moment she takes her first breath until the day she dies. END_OF_DOCUMENT_TOKEN_TO_BE_REPLACED

For Download: Leaflet on FGM in the Middle East 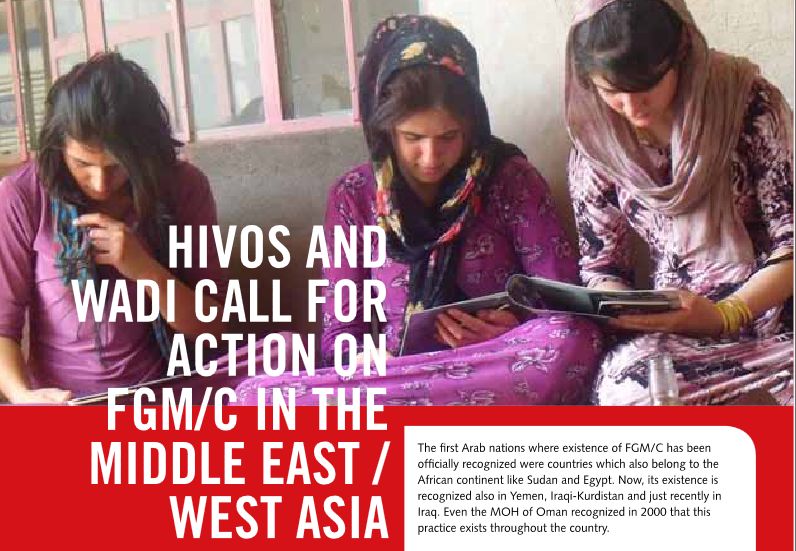