30.9.2019. Two weeks ago, the Omani Ministry of Social Affairs und Development announced a change in the law protecting children. Now, the convention of the child includes a specific prohibition of female genital mutilation (FGM). This change in law came as a surprise to most observers. END_OF_DOCUMENT_TOKEN_TO_BE_REPLACED

23.8.2018. The newest survey on female genital mutilation (FGM) in Oman bears shocking results: 95,5 percent of women reported to be mutilated. For the survey 200 women of different ages and educational backgrounds were interviewed in the governorate of Dakhiliyah during the last three months of 2017. END_OF_DOCUMENT_TOKEN_TO_BE_REPLACED

FGM: Slow progress when talking to the UN about numbers

UNICEF just came out with new numbers on FGM. Instead of 140 million, the United Nations Children’s fund now estimates the number of women and girls having undergone female genital mutilation worldwide to be at least 200 million. Those extra 60 million come from adding Indonesia to the list of countries “where FGM is most concentrated”.

But FGM in Indonesia is no news. Everybody who is concerned with FGM knows that the practice is widespread not only in Indonesia, but also in Malaysia, Singapore, Thailand and Brunei. In the case of Indonesia, there were several small and large studies showing how widespread FGM was. In 2003, a large-scale study by the Population Council and USAID found that 86-100% of girls aged 19 reported to be “circumcised” (number of households surveyed: 1694). END_OF_DOCUMENT_TOKEN_TO_BE_REPLACED

END_OF_DOCUMENT_TOKEN_TO_BE_REPLACED

Here is our public report of the first year of our work. END_OF_DOCUMENT_TOKEN_TO_BE_REPLACED

“Hannah Wettig, who manages the Stop FGM Middle East campaign for Germany-based nonprofit WADI and Hivos, pushes back on the notion of FGM as an “African problem” and criticized UNICEF’s reliance on national survey data. For one, she said, Middle Eastern women may be more reluctant to admit they have been through the procedure, as it’s more secretive than the public rite of passage in some African countries. In addition to Iraq and Yemen, Wettig said it happens in Asian countries that include Oman, United Arab Emirates, Iran, Pakistan, India, Malaysia, Singapore, Indonesia, the Maldives and the Philippines.”

On May 7th to 10th the Second Middle East & Asia Conference on Female Genital Mutilation (FGM) was held in Istanbul where more than thirty activists and researchers from Iraq, Egypt, Iran, Oman, Saudi Arabia, Malaysia, Indonesia and India met as well as representatives from UNICEF Iraq, Orchid Project (England) and Terre des Femmes (Germany). It was the second such conference organized by the German-Iraqi NGOs WADI and the Dutch NGO Hivos.

For the longest time FGM was regarded as an African problem, based on the African continent with some prevalence in neighboring countries like Yemen. This mantra was overcome only recently when WADI strated raising conscious, that FGM is also widespread in a Middle Eastern country like Iraq. In January 2012, the first conference on FGM in the Middle East was held in Beirut. In the last two years the STOP FGM Middle East Project by WADI and Hivos collected further evidence, that countries like Oman, Malaysia and Indonesia have a significant high prevalence rate of FGM. Therefore, this second conference widened the scope from the Middle East to South East Asia. END_OF_DOCUMENT_TOKEN_TO_BE_REPLACED

Some thoughts on the Istanbul conference on FGM

I just realized I have not updated this blog for four months and I will not allow myself to feel guilty because my time has been occupied with things that will help my community. I intend to come back to writing as soon as possible once I’m finished with a couple of projects. To give you an update of ‘part’ of what I’m doing, I’m currently in Istanbul attending/presenting at the 2nd Middle East and Asia Conference on Female Genital Mutilation. It’s an extremely sensitive topic and one that needs to be tackled in Oman and in Dhofar in particular. No one is keen to be the one to start tackling this issue, but after years of slowly gathering data and understanding the topic, I am no longer hesitant. However, I am also a firm believer in starting any awareness-raising by gaining support of authorities instead of adopting an us-and-them approach that many activists tend to follow. Ministry of Health five-year plan 2006-2010 intended to start raising awareness on FGM; however nothing was done. Perhaps the topic was too sensitive? Perhaps they didn’t have the will to start tackling? Perhaps they didn’t find the right people on the ground to do the dirty work? I have been speculating a lot. In all cases, the government has tried. Many of you may remember that I have been writing openly about FGM since 2011 on my blogs and in the newspaper. I have received endless criticism and also a lot of support. I started studying FGM practices in Dhofar in 2006. Although no detailed studies have been conducted, the general picture is very clear. It’s extremely prevalent, it’s harmful, and it has to stop. Nuff said for the moment. Bear with me until I’m organized enough to start SAR (Smart-Awareness-Raising), which is a tricky thing to accomplish in Oman.

Berlin, 30.4.2014. By WADI. The Second Middle East & Asia Conference on Female Genital Mutilation (FGM) by WADI and Hivos will take place from May 7th to May 10th in Istanbul.

The conference will tackle two myths about Female Genital Mutilation. It is commonly believed that FGM is mainly practiced in Africa and that it has no religious grounds. Both claims are not true.

FGM is practiced widely in Asia: In Middle Eastern countries such as Oman, the United Arab Emirates, Iraq and Iran, but also in Southeast Asia: in Malaysia, Indonesia, Singapore, India and the Maledives. END_OF_DOCUMENT_TOKEN_TO_BE_REPLACED

Feb 6th: Many media reports on our work and FGM in Asia

On February 6th, the eleventh international Day of Zero Tolerance to Female Genital Mutilation, a number of media outlets have picked up on the topic of Female Genital Mutilation in Asia. Many non-governmental und international organizations tackling FGM, including the World Health Organization, still don’t mention the existence of FGM in many Asian countries. Breaking the silence is a first step to saving millions of girls in these countries from being mutilated. WADI and Hivos stressed this in their press declaration on this year’s February 6th. Therefore, we are happy that many journalists have now brought out this message. In several cases Stop FGM Middle East and WADI were able to provide information. 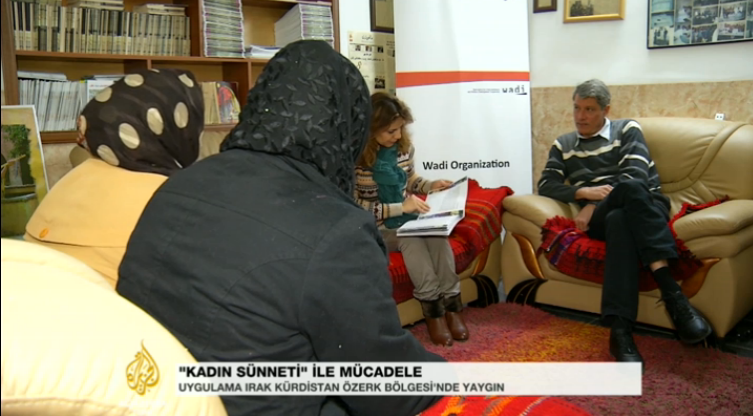 Al Jazeera Turkey came to Wadi’s office in Suleymania in North Iraq and spoke with victims of FGM. The film also describes the situation in Iraqi Kurdistan and the successful campaign against FGM.

De Vokskrant, the largest newspaper of the Netherlands also reported on the work of Wadi in Iraqi Kurdistan on February sixth. On February 7th, they ran a long story on FGM in Indonesia, underlining the importance to stop ignoring the brutal tradition in Asia. END_OF_DOCUMENT_TOKEN_TO_BE_REPLACED