20.05.2019 The distribution of the Educational Brochure as a Risk Minimization Activity to raise awareness about FGM complications among residents of Javanrud and Salas. 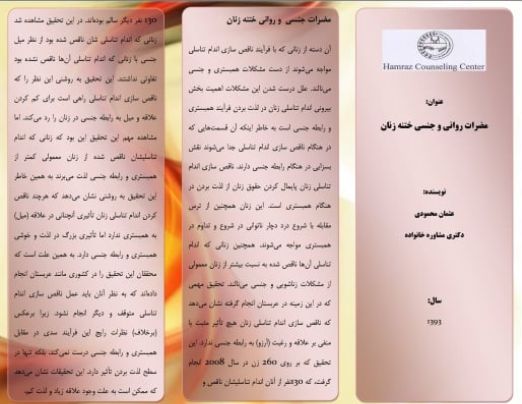 Educational brochures are an important tool for raise awareness about FGM and its complications among in risk people. It is important to evaluate the impact of any risk minimization tool to understand the effectiveness of the strategy.

The objective of this work was to distribute of a targeted educational brochure among residents cities of Javanrud and Salas (Kermanshah Province) as a risk minimization strategy for the stop FGM in these important regions of Iranian Kurdistan.

Dr. Osman Mahmoudi and his team at Hamraz Counseling Center held a prospective, non-interventional study designed to distribute a special brochure designed to provide important new information on female genital mutilation and its complications to a specific urban population consisting of citizens of Salas and Javanrood in Kermanshah province.

The statistical population in this educational project included all women and girls over 18 years of age in the target cities. During pre-marriage classes in 2018 more than 2000 girls and women over the age of 18 in 15 rural and urban areas of Javanrud and Salas were directly trained by 20 trainers about female genital mutilation and its complications. And more than 2000 leaflets on female genital mutilation and its complications in these 15 urban and rural neighborhoods were distributed by the 20 trainers.

It’s important we noted that all of 20 trainers received advanced training about female genital mutilation and complications by Dr. Osman Mahmoudi prior to training and distribution of brochures. Distribution of targeted educational brochures may be an effective risk minimization strategy to raise awareness about FGM and its complications in Kermanshah; Educational brochures may also be an effective channel for sharing information on how FGM should be best managed and ended. The Campaign of Hamraz Counseling Center is hosted by Dr. Osman Mahmoudi. Over the past ten years, the campaign has been active in research, education, and counseling in the cities of Kermanshah (That women are more likely to be circumcised) in the field of female genital mutilation. If they receive more support for running their programs to stop FGM, these important activities can spread to other cities and provinces of Iran.

Sahiyo: No, even ‘symbolic’ or ‘mild’ female genital cutting is NOT okay

2.7.2016. Should mild forms of Female Genital Cutting (FGC) be legalised? Should supposedly “harmless” nicking or slicing of clitoral tissue be medicalised, simply because getting communities to completely stop FGC happens to be a very difficult task?

There has always been some support for mild, medicalised FGC, chiefly from communities that claim to practice female “circumcision” and see it as completely different and divorced from any form of genital “mutilation”. And for years, this view has been firmly refuted by survivors and activists who don’t want any girl to experience the trauma, betrayal and potential harm that even the least severe forms of FGC can cause. END_OF_DOCUMENT_TOKEN_TO_BE_REPLACED

Sahiyo: Bohra Men Speak Out to Save Their Daughters from Female Genital Mutilation

27.6.2016. The fatwa given during the Zikra majlis by Syedna Mufaddal Saifuddin in favor of female genital cutting dug up the wound in my heart, which is also the reason I am writing this post.

Looking at parts from the audio clip leaked from the majlis, at one point, Syedna Mufaddal Saifuddin says what translates to English as:

“It must be done. If it is a man, it can be done openly and if it is a woman it must be discreet. But the act must be done. Do you understand what I am saying? Let people say what they want.”

END_OF_DOCUMENT_TOKEN_TO_BE_REPLACED

Walls in the reception of the Global Ikhwan clinic in Rawang, north of Kuala Lumpur, are pale pink and a nice, if medical, scent is hanging in the air. A fashionable headscarf conceals the black hair of Najwa, a 24-year old woman, standing at the counter. She is wearing high heels and light blue denim trousers. Holding her five-year-old daugher firmly by the hand, Najwa is making an appointment with Dr. Mighilia Aziza, an obstetrician and a gynecologist. END_OF_DOCUMENT_TOKEN_TO_BE_REPLACED

When she was 7, Saleha Paatwala’s grandmother took her out for what she thought would be a party.

“I was told it would be a huge gathering where kids like me would also be,” Paatwala said.

Instead she found herself in a dark, messy room where three other women were waiting. They pulled her down, held her hands and feet so she couldn’t move and slipped off her underwear as she screamed.

END_OF_DOCUMENT_TOKEN_TO_BE_REPLACED

Culture and Rights: The Struggle From Within to End Female Genital Cutting

Ashraf and Shazia use the word “guilt” often.* Their voices tremble as they rewind to the day when they read an article in an Indian magazine, Manorama, that opened their eyes to the reality of khatna – the practice of female genital mutilation among their community. “We felt guilt – immense, powerful guilt – when we realized that this was not needed, that we didn’t need to put our elder daughter through this,” the parents say. “We had no idea this was just going on, prevalent, generation after generation.” END_OF_DOCUMENT_TOKEN_TO_BE_REPLACED

18.3.2016. A former midwife, a mother of two girls and a Dawoodi Bohra community leader sentenced over mutilation of two young girls in Australia’s first criminal prosecution for FGM

A retired nurse, a mother of two girls and a Dawoodi Bohra community leader have each been sentenced to a maximum 15 months in prison after Australia’s first criminal prosecution for female genital mutilation.

END_OF_DOCUMENT_TOKEN_TO_BE_REPLACED

The Guardian reports about FGM in Dagestan

10.3.2016. It is not the first time that we hear about FGM in Dagestan. But so far, we only had hints from Russian media. Now, the Guardian reports about a magazine in Dagestan which makes FGM a topic.

“The magazine also draws attention to the practice of female genital mutilation (FGM).

“I was recently sent a link to a paper which said that FGM is Sunna [traditional Muslim law based on Muhammad’s words or acts]. I took exception to that and did some research and found that it is not true.”

Anokhina said that some of her correspondents had also refused to write about FGM, so she had started to investigate it herself.”

Read the full story in “‘Funny’ stories from the frontlines of Dagestan’s gender war“.

In the hamlet of Tirpaspyan, a loudspeaker crackles into life, summoning the local women to the village mosque. END_OF_DOCUMENT_TOKEN_TO_BE_REPLACED