Female genital mutilation was long considered an “African problem”, its existence in Asia was simply ignored. There may be many reasons behind this blindness. In a series, Stop FGM Middle East will publish different analyses of the phenomenon. The first takes a look at the figures, the way questions are asked or not asked and how answers are interpreted. 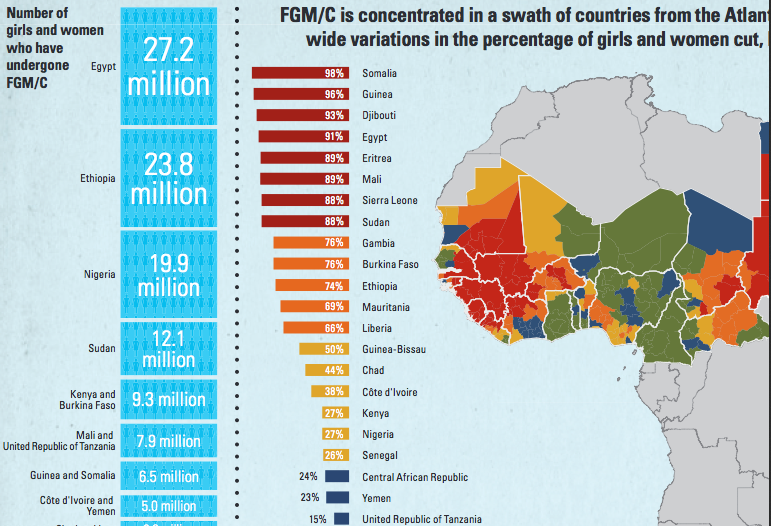 1.12.2013. In December 2012 the UN general assembly condemned female genital mutilation (FGM). This step was followed in 2013 by a comprehensive UNICEF-report about FGM worldwide. Since its publication the media has reported about great progress in the struggle against FGM citing this report. While UNICEF itself speaks of small progress, some may accidently exaggerate numbers.UNICEF counts 125 million girls and women as victims of FGM – a number significantly lower than the former UN-estimation of 140 million victims worldwide.

This astounding reduction is explained when reading deeper into the text: The 125 million are actually not worldwide cases, but only those in the 29 countries in which women were asked about FGM. Indeed, it could be expected that journalists can read. However, UNICEF has contributed quite directly to this misunderstanding. According to the report, those 29 countries constitute those “where the practice is concentrated”. This must be disputed.

Except for Yemen and Iraq all 29 countries are located in Africa. For the longest time female circumcision was considered an „African problem“, the practice was seen as rooted in African pre-Islamic, pre-Christian culture. For Yemen, the only non-African country where it was long known to exist, it was assumed to be imported from the African continent.

Newer evidence shows that these assumptions can’t be correct, neither geographically nor does the explanation suffice. The narrative already took a severe blow when it surfaced that FGM is prevalent in parts of the Kurdish region of North Iraq. Surveys in this region and lobby work in fact led to the inclusion of Iraq in those 29 countries UNICEF now considers to be those where the practice is concentrated.

By now it is evident that FGM is practiced in many more Asian countries. Small-scale surveys show its existence in Iran, Saudi Arabia, Kuwait and the United Arab Emirates. In Oman and Pakistan media reports have tackled the issue. A broad discussion about bans and restrictions has been taken place in Indonesian media for years.

All these countries have been mentioned in recent UN publications about FGM. Not so in the new UNICEF report which does not even name Indonesia. With a population of 240 million the potential number of victims is by multiple times larger in Indonesia than in many relatively small African countries which were surveyed. Why UNICEF did not mention the existence of FGM in Indonesia, Oman or Iran can be easily explained: In these countries they simply didn’t ask about FGM.

The UNICEF report is based on UN initiated Multiple Indicator Cluster Surveys (MICS) and Demographic and Health Surveys (DHS), which are conducted in regular intervals in most developing countries. The actual interviews are conducted by national governments and the compilation of questions out of the UN developed questionaires may vary. The choice is sometimes puzzling: While questions about the use of condoms when inquiring about HIV prevention are asked in countries where most people have no clue what they are, questions about FGM are missing even in some hot spots of FGM. In the case of Yemen, the survey did not include any questions about FGM during the last rounds of surveys, which is why UNICEF now relies in its report on data from 1997.

24 of the 29 surveyed countries have passed legislation against FGM

For Iraq the question module FGM was included the first time during the fourth MICS round in 2011. In the same year the parliament of the Kurdish region in Iraq had passed a law making FGM punishable. Thus, the problem was not only officially recognized at this point but there was a political will to tackle it. In fact, 24 of the 29 surveyed countries have passed legislation against FGM, some impeding some outlawing it.

This could have led to another problem: Wouldn’t a woman hesitate before she admits to a criminal deed when questioned by a government employee? In Islamic and Middle Eastern countries a further complication when asking about FGM must be considered: Contrary to some African societies where FGM is part of a public rite of passage the practice is generally concealed in Middle Easteern societies. It is not a public act and undertaken more or less secretively by the women of the family. It is not unusual to find men who haven’t even heard of it and have no clue that their wife, sisters and daughters are circumcised.

Illegality and taboo surely would both be good reasons to use indirect questioning techniques. To add yet another problem: the surveys inquire multiple factors. The questions about FGM are asked among more than 150 others ranging from drinking water access to vaccinations to educational methods. The FGM question module is located between the module asking about domestic violence and the HIV module.

It must be wondered what a woman from Southern Iraq may answer after she has already been questioned for hours about plenty of subjects, some quite complicated to answer, when it comes to FGM – a topic she may not have even discussed with her husband. Picturing this situation some peculiar results of the MICS 4 survey in Iraq could be explained. In some regions less than one percent of women reported to have been circumcised, yet ten percent in these same regions favored retaining the practice. It is hardly surprising that this type “official” data collected outside the Kurdish region found much less women effected by FGM than a smaller-scale survey and anecdotal evidence suggests.

Using the same methods and questionaires in all countries may seem necessary to achieve comparable results. However, being entirely culturally blind does lead to wrong results. This is true for the explanation UNICEF-researchers offer for the existence of FGM.

Claudia Cappa, the lead author of the UNICEF report, told France 2 very convincingly that FGM is practiced “very clearly because of social obligation”. The practice according to UNICEFs findings is continued because of social pressure, “even though FGM/C is not a religious requirement”, says Al Cappa.

Since she already suggests that religion is not the reason for mothers to have their daughters cut one would expect that UNICEF inquired about religion. At least for Iraq the surveyed women hadthree choices to answer when asked about their reasons for FGM, all of them being more or less social, religious reasons were not provided. Particularly for Iraq, this is surprising.

For Africa it was long assumed that FGM was not connected to religion because Muslims, Christians and others practice it alike. Thereby, it was overlooked that while Christians indeed have no religious reason for FGM, the picture in Islam is not as clear.

It is true, the Quran does not mention FGM, yet several sayings of the prophet do. One of the four Sunni law schools, the Shafa’i, interprets these sayings in the sense that female circumcision is in fact religiously required, two other schools recommend it, but see no obligation, only one sees no connection to religion. The Shafa’i is the dominant law school in parts of Iraq and in Indonesia. This coincidence should certainly not be overlooked when investigating reasons for a practice.

To develop strategies we need to understand people’s motivation

Even if clerics have a clear stand against FGM – and even individuals within the Shafa’i school do – this can still mean that the people practicing it believe they do it for religious reasons. The experience in Iraq shows that most women in Kurdish villages believe the practice to be “sunnah”, meaning recommended by Islam. This is an important finding to develop strategies against FGM – an aim UNICEF feels committed to. To investigate the prevalence and patterns of female genital mutilations in the Middle East it is necessary to adjust questionaires and methods culturally. The fifth round of MICS is just beginning and will include Oman, the United Arab Emirates, the Palestinian territories, the South of Thailand (where a large Muslim minority lives) and again Iraq. According to UNICEF’s New York office the questions about FGM will be included in the MICS in Oman. It is not clear yet, if the questions will be asked in the other countries. Thus, it may very well be possible that in the next UNICEF report we will again not read about many Asian countries where FGM might be a problem.

Oliver M. Piecha holds a Dr. (Ph.D.) in history and works for the Iraqi-German NGO Wadi, which first conducted surveys on FGM in Iraq. He is researcher for Wadi’s and Hivos’ “Stop FGM in the Middle East” campaign.