30.9.2019. Two weeks ago, the Omani Ministry of Social Affairs und Development announced a change in the law protecting children. Now, the convention of the child includes a specific prohibition of female genital mutilation (FGM). This change in law came as a surprise to most observers.

Previously, Article 4 prohibited vaguely „harmful traditional practices“. The term, internationally often used as synonym for FGM, was not understood as such within Oman. Religious leaders and even the Grand Mufti of Oman have stated repeatedly, that the genital cutting of girls was a religious duty.

Now, the law has been specified, listing six examples of what kind of harmful traditional practices are prohibited, naming under point 1 female genital mutilation, but also the burning or ironing of children to drive evil out, forcing children to drink something harmful and other practices causing physical harm.

Women’s rights activist Habiba al Hinai says in an interview with Stop FGM Middle East that the announcement generated a broad debate in social media: “People were taken by surprise, no one knew this was coming. Many men are angry. They say it is against religion. But women jubilated.” 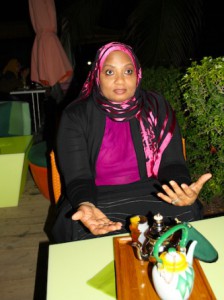 She herself has lobbied against FGM since 2013 when she did a survey of 100 women in the capital of Muscat and found that 78 percent of randomly interviewed women in shopping malls and a hospital said they had undergone FGM. This high percentage came as a shock even to those few who had already raised the issue: It was generally believed that the practice was mostly prevalent in the conservative Southern region Dhofar and in some rural mountainous regions in the North – not in the very modern capital.

After publishing her study, Al-Hinai has met with representatives from the Ministry of Health and the Ministry of Social Affairs. “I felt they were very interested and wanted to act, but then suddenly communication stopped – I thought, someone might have told them to back off and leave the issue alone.”

In fact, already in 2005 the Ministry of Health projected in their 5-year-plan actions against female genital mutilation and mentioned a study showing a high prevalence in some areas. However, actions were never taken and the study remained for long unavailable to outsiders.

In 2018, the social scientist Hoda Thabet and the doctor Muna Al Kharoussi published another study this time in the Dakhiliyya governerate. They found 95,5 percent of the surveyed women mutilated – those 0,5 percent who were not were not of Omani origin or had a Zanzibari background (descendants of former Omani colonial settlers in Zanzibar who are known not to practice FGM).

Habiba Al-Hinai speculates that the motivation for changing the law may have come at this moment because it will soon be Oman’s turn for the Universal Periodic Report (UPR) – a review of human rights records of all UN member states. As Al-Hinai states the Omani government is sensitive to international criticism of women’s rights abuses.

Little support from the UN

Since 2013 Stop FGM Middle East has lobbied against FGM in Oman together with local activists, raising the issue on international conferences, bringing it to the attention of media and pushing the UNFPA-UNICEF joint program to eliminate female genital mutilation to take action. Response from the UN was low.

Anti-FGM activists complained that they were not received at the UNICEF office in Muscat. A local representative of the UN Population Fund claimed in 2015 that the brutal practice does not exist in Oman. It was not until the Stop FGM Middle East initiative informed the New York office of the UNFPA-UNICEF program to eradicate genital mutilation that the local UN agency withdrew its claim.

As with other Asian countries, the UN did not acknowledge for a long time that female genital mutilation was practiced there. Many UN reports did not even mention Indonesia, where a survey financed by the UN Population Fund had already found widespread use in 2003. Anti-FGM activists in India were told that there was no female genital mutilation in India when they visited the UNICEF office in Mumbai.

Still, the UN still does not take note of FGM being practiced in a large number of Asian countries, such as Malaysia, Thailand, Brunei, Cambodia, Sri Lanka or Iran. However, for those who lobby against the practice, such recognition would be important, because it offers some protection. In some places even mentioning female genital mutilation can be dangerous. In Malaysia, a fatwa against Sisters in Islam, the only women’s rights organization to address the issue, has just been confirmed by the Supreme Court. In Iran, the social anthropologist Kameel Ahmady, a pioneer in his studies on FGM in the Kurdish regions, has ben detained since last month.

So, it seems unlikely, that the UN exerted some pressure in the case of Oman. Yet, one international politician did take up the case openly recalls Al Hinai. When the German vice-president of parliament Claudia Roth from the Green party visited Oman in 2014 she met with Al Hinai – a prominent activist in the Omani Arab Spring. “I raised the issue of FGM with her and the next day she spoke about it infront of the Majlis Al Dawla (the house of representative).”

This was according to Hinai the first time the issue was addressed in such an open way. At the time any mentioning of the topic in Arabic language was repressed and those who did so faced state harassment, as all activists affirmed to the team of Stop FGM Middle East visiting Oman in December 2013. It was possible though to write and blog about it in English.

Al-Hinai believes that the speech by Claudia Roth was decisive since the Omani government, especially the Sultan are keen on showing that they promote women’s rights. However, she also has criticism for the Germans: “The next day, the embassy called me and asked if I got in trouble. I told them, I was fine but would like to come to the embassy and meet there. But they didn’t seem to get my point. Of course, I had already gotten a visit by state security, but I couldn’t say so because phones of activists are tapped.” The embassy personal only gave her an appointment weeks later.

Today, Habiba Al-Hinai lives in exile in Germany. She is not very hopeful that the Omani government will live up to its promises after the law change. Government officials have talked in the media about education and awareness raising. “However, I am happy that the punishment (for FGM) is relevant.” The law provides for a punishment between six months and three years.