Y-Magazin, Oman, 5.2.2014. It’s a practice that is banned in Oman’s hospitals, yet female circumcision is being carried out on babies and young girls across the Sultanate. Y investigates. Report by Kate Ginn

The painful memories are buried deep but not forgotten. Muna remembers the voice of her mother calling her.

“She was saying ‘I’ll buy you an ice cream and a yoghurt-filled chocolate’. I joyfully ran behind her in my green trousers and dress,” she recalls. “We walked into dark roads further than the shop. God, I will never forget how sickening and awful that place was.”

Muna was not going to the store for sweets. Her mother was taking her to be circumcised, as she herself had been at the same age.

END_OF_DOCUMENT_TOKEN_TO_BE_REPLACED

Day of Zero Tolerance to Female Genital Mutilation; Action in Asia is needed

On the fourth official International Day of Zero Tolerance to Female genital mutilation (FGM), the practice is far from being eradicated. While the numbers of mutilated girls are decreasing in Africa after decades of concerted efforts, large regions where FGM is practiced are entirely neglected in this worldwide battle. This is particularly true for Asia. The practice is widespread in Indonesia and Malaysia, it exists in Iran, Iraq,  and Jordan. In several countries of the Arabian peninsula FGM is practiced by relevant parts of the population.

These countries need to make an effort to fight FGM among their population. We also call upon Indonesia and Malaysia, where the practice is legally carried out in hospitals, to ban FGM and initiate a strong campaign against it. In some Arab countries and Iran the practice is not legal in hospitals, yet governments shy away from tackling the issue. As a first step reliable studies must be conducted and a campaign initiated. In some countries  authorities must stop censuring voices that talk about FGM. END_OF_DOCUMENT_TOKEN_TO_BE_REPLACED

Oman is not on the map of countries where female genital mutilation is practiced. Neither the United Nations nor international NGOs have taken notice of FGM in the Gulf region – except Yemen. Yet, there are quite a number of reports about its existence in Oman and in most other countries on the Arabian Peninsula, some old from the 1960s, others are medical studies about cysts and other complications.

Stop FGM Middle East picked Oman for a first field trip to the Gulf region because of its relatively liberal political climate and the government’s concern for women’s rights.

Several Omani bloggers and journalists have written about FGM. The Ministry of Health mentioned it as a matter of concern. It was certainly a good sign that the issue was discussed openly – even if seldom.

From the different reports it was hard to assess how widespread the phenomenon really was. Some articles estimated a prevalence of 20% to 30%. Several authors assumed that FGM was mainly practiced in the Southern governorate of Dhofar with some pockets in the mountainous area in the North where a “pricking”-type was practiced. We were skeptical: Other reports hinted that FGM might be much more widespread than these authors believed. END_OF_DOCUMENT_TOKEN_TO_BE_REPLACED

According to a new study from Oman, female genital mutilation constitutes a widespread phenomenon in Oman in all age groups, and among women from all regional and educational backgrounds. Out of 100 women questioned 78 stated to be “circumcised” (they were asekd if had undergone “khatana al banat”). The human rights activist and statistician Habiba Al Hinai conducted the study “Female Genital Mutilation in the Sultanate of Oman” in cooperation with Stop FGM Middle East for which she interviewed 100 female and 100 male participants in hospital waiting areas, shoppings malls and fast food restaurants in the capital Muscat.

The practice of female genital mutilation was long only considered prevalent in the Southern region of Dhofar with only small pockets in the North. Thus, it is most notable that the participants in this study originated from Northern regions with only two coming from Dhofar. The highest prevalence of FGM seems to exist in the regions Sharqiya North and South (18 out of 19), the Dakhiliya (11 out of 13) and the coastal Batina region (33 out of 38 questioned). Participants who originate from Muscat were less likely to be circumcised, but still more than half of the participants were affected. END_OF_DOCUMENT_TOKEN_TO_BE_REPLACED

Mufti of Oman: “We can’t describe it as a crime against women”

The Omani human rights activist Habiba Al Hinai send the Grand Mufti of Oman Ahmed bin Hamad Al Khalili an inquiry about the stance of Islam towards FGM. The Mufti of Oman replied in a letter in early December 2013:

Circumcision  is allowed in Sunnah, and none of the old Ulama (religious legal scholars) have said it was “hated”, but they have disagreed if its a “must” or a preferable sunnah to do, or allowed to do. The confusion was based on different hadiths by the prophet, and whether to consider these  hadiths as true and correct. They (the hadith) never mount up that it is a must, and it was always mentioned in relation to male circumcisions.

Even though its not an operation you must perform on women, we can’t describe it as a crime against women or as a violation of women’s rights. What is referred  to as FGM is not the practise that the Sunnah talked about. Circumcision is simple and clear to cut a piece of the clitoris without causing any damage, every thing that is not this shouldn’t be called circumcision.

Therefor what ever the WHO described as circumcision is not accurate as these are bad  practises of those unable to perform proper circumcision.

Therefore, circumcision is not allowed by sharia if it causes damages, this is a rule: to damage and no damager, and if it was medically proven by well trusted doctors that circumcising women will cause damage, it should be banned based on the no harm rule of the sharia.

Meeting a Circumciser: “Men suffer from it” – In Salalah facing up against FGM is almost impossible

Salalah 4.12.2013. The women at the Women’s Association call her Doctor Marzouka. With her sun glasses and gold rings on her fingers the 50 something year old lady has a modern air around her. Playing with her car keys she shows that she is an emancipated woman – women driving is not at all for granted in this conservative part of Oman. Doctor Mazouka works as a doctor’s help in a state hospital, at the side she cuts the clitoris of newborn girls.

“She is very smart. When she worked with the doctor in the surgery she watched closely what he does. This is how she learned,” explains Saida, who works since 15 years for the Salalah branch of the Women’s Association, the semi-official organization for women in Oman. The Association has arranged the meeting with the cutter.

Marzouka is proud of her skills. She stresses that she is trained and not a traditional cutter. “My mother did not do this. I trained myself in the hospital.”

Openly, she describes her job: “I use a clamp and then a knife.” She carries rubber gloves and two sprays, one anaestatic one disinfectant, in her bag. Her business runs well. She cuts two to seven girls a day, she says, making 15 riyals (30 Euros) each. Most costumers she meets in the hospital in the delivery ward. In Dhofar, the Southern province of Oman, girls are traditionally mutilated in the first two days of their lives. Marzouka also advertises her services on the internet and besides, everybody knows her in town – as the women of the association confirm. END_OF_DOCUMENT_TOKEN_TO_BE_REPLACED

Field Trip to Oman: FGM is acknowledged but everyone is afraid to tackle it 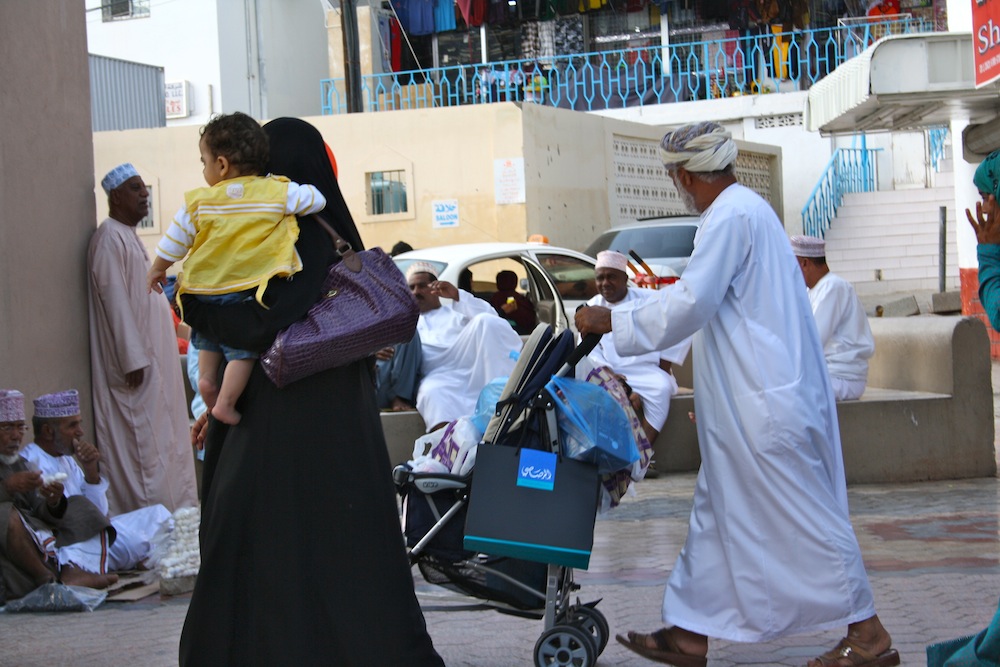 The Sultan modernized the country but values traditions: The dishdascha is obligatory in government jobs

30.11.2013, Muscat. The activist Habiba Al Hinai has asked women in shopping malls and clinics about female genital mutilation. 78 percent reported to be circumcised – more than even the most FGM-critical Omani bloggers estimated (“Linoleum Surfer” assumed 20 percent victims). What is even more surprising about Al-Hinai’s ad-hoc-study: The women interviewed come from all regions in Oman: Muscat, the Batina, the Dakhiliya, the Sharqia. Only 2 came from Dhofar. So far, most people believed that FGM was mainly practiced in the Southern province of Dhofar.

A team of Wadi’s and Hivos’ Stop FGM Middle East campaign is currently in Oman, talking with local actors about these findings, their own assesment and ideas how to campaign against female genital mutilation.

The account of the blogger “Omani Princess” in Muscat supports Al Hinai’s finding. She tells us that it is practiced by her in-laws. They come from the mountains near Muscat, the Dakhiliya. “It is done with a hot needle”, she has heard. Her husband knows that in some cases a nail clipper is used.

At the Omani Women’s Association the women are surprised. “No, it’s not a problem here in Muscat and not in the mountains,” insists Nashia Al Kharusi, the president of the local Muscat branch. She has long heard of the practice in Dhofar and thinks the Ministry of Health should do something to stop it. “Maybe some do it in the North because they are influenced by the Emirates?” she ponders.

That FGM is practiced widely in the Emirates is well known in Oman. Also the Omani Princess tells us about it. She is well connected with other women in the region and since she believes that FGM is a crime she has talked with them about it. She can tell us: It is practiced in Bahrain, in Kuwait and also in Jordan.

But the “Omani Princess” doesn’t know how to overcome the social taboo surrounding the topic. “Unthinkable to write about it in an Arabic newspaper, only the English ones can publish articles on it.” This is also the opinion of a journalist from the Muscat Daily we meet.

Habiba Al Hinai explains to us why only the official Women’s Association can initiate a campaign. “There are no independent NGOs, you won’t get a license and you won’t be allowed to work.” She must know. As one of the main protagonists of the small Omani spring she has tried to found several groups with others, among them the Omani Human Rights’ organization.

Yet, the women at the Women Association don’t seem too confident. Al Kharusi has been trying to get an appointment at the Ministry of Health to talk about FGM. “They must do something, because in Oman things have to be official.” She is certain that FGM could be eliminated within few years “because if something comes from the government, people follow.” This may well be true. Sultan Qaboos is a popular monarch for he integrated all ethnic and religious groups, modernized the country and improved the status of women to such an extend that the Thomas Reuters Foundation recently rated Oman as the second best Arab country for women.

Even the activist Habiba says: “If it wasn’t for the Sultan we would still live imprisoned. These people (the religious) would lock us in the house not allowing us to work or even go out.”