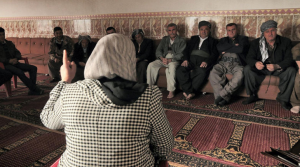 A WADI field worker talks about the dangers of FGM to local officials in a rural area of the Kurdistan Region. (Photo: The National/Florian Neuhof)

Only 10 years ago, this region had one of the highest FGM rates within Iraqi Kurdistan and ranked among the highly effected places worldwide. More than 80 percent of women, surveyed in 2007, had undergone the brutal procedure. The now total elimination of FGM was achieved through a 15 year-long community-based campaign by the Iraq-German NGO Wadi.

“There has not been a single day during the last 15 years, when our teams did not visit a village in Garmian”, says Shokh Mohammed, a team organizer in Wadi’s main office in Sulaymania. She stressed the importance of continuity in the struggle against FGM: “Effects of any campaign will only show in the next generation. If you educate women today they may be shocked of what they did to their daughters, but they will have forgotten when their daughters have children.”

Only 16 years ago, in 2004, Wadi’s mobile teams educating village women on health issues stumbled over the existence of FGM here. Up till then, FGM was considered to be an African practice. UN publications explained the prevalence in Yemen with migration from Africa, it’s existence in Indonesia was known, but remained unexplained.

Since then, Wadi has been working continuously to raise awareness about the disastrous effects of FGM for health, sexual well-being and gender relations in the Iraqi region of Kurdistan and beyond the border: in Central and Northern Iraq and Iran. Through its Stop FGM Middle East & Asia campaign Wadi was able to collect viable information that FGM was indeed widely spread in Asia with at least 17 countries, where girls’ genitals are cut.

From the beginning, Wadi chose a community-based approach with many local activists, local politicians and Kurdish NGOs joining the effort. “It is important to work with – and not against – communities”, says Assi Frood, who has been part of the campaign since its beginning. “This means everyone in the community needs to be involved. Even though it is done by women to girls, we needed to get the men in the boat as well.” In concert with other Kurdish NGO’s and activists Wadi helped to create the Stop FGM Kurdistan campaign in 2007.

Wadi, working in Northern Iraq since 1993, offers a variety of services and supports self-organizing efforts in Kurdistan. A Women & Youth Radio, Mobile Playgrounds for children, literacy or computer classes and many more projects have made Wadi a popular and respected actor. When tackling the issue of FGM, Wadi’s women led mobile teams work closely with women, male community leaders, village elders and religious leaders in order to convince an entire village or area to collectively stop practicing FGM on their daughters.

One of the main obstacles to overcome when fighting FGM is securing funds for such a long period of time. Most international donors, governments or UN, do not support programs running for 15 years, but only much shorter periods of one to five years. Wadi was lucky to find with the Dutch government and the Dutch NGO Hivos partners who supported its efforts most of the time, while the German consulate, the US State Department, Unicef and others filled the gaps.

It has also been essential that the Kurdish government was supportive of the campaign after the Kurdish parliament enacted Law No 8 of 2011, which bans FGM and other forms of violence against women, children and the elderly. Thereby, it was possible to establish centers, police stations, and special courts for cases of domestic violence in the Kurdistan Region. The High Women Council of the Kurdish Regional Government announced last year its commitment to further support efforts with an own comprehensive program.

Yet, getting governmental and international support was only made possible through the combined efforts of activists, NGOs and journalists who broke the silence and pushed the issue on the agenda a decade ago. A breakthrough was a report by Human Rights Watch in 2010 about FGM happening in Iraq Kurdistan “They took me and told me nothing”. It took another six years for the UN to recognize the existence of FGM in Iraq and acknowledge that FGM may in general be much more widespread in Asia than assumed. In 2016, UNICEF raised the number of affected girls worldwide from 120 to 240 million.

There is still urgent need for more efforts against FGM in Asia. In many countries such as Sri Lanka, Malaysia, Thailand, Brunei governments and political actors remain hostile against any campaigns. In some places like Dagestan, Pakistan or Brunei not even research has been done yet.

Wadi will celebrate the historic moment of the elimination of FGM after only 15 years in Garmian together with the Dutch Consulate General in Erbil with a press conference and ceremony in Kalar, the capital of the Germian region.

On the event a new project will be announced, supported by the Dutch Consulate General, to work towards ending FGM in the areas of Ranya, Erbil and Halabja. While continuing the campaign against FGM Wadi will also work with victims of FGM on how to regain parts of their lives that were negatively impacted as a result of what was done to them, which is the second phase of Wadis long-term commitment to FGM affected communities.

By hannahcaroline36 in News, Press Statement on 2020/02/05.
← Oman bans unexpectedly Female Genital Mutilation Feb 6: Wadi speaks on DW about what made success in Kurdistan possible →