Day of Zero Tolerance: Campaign in Kurdistan in danger

After a most successful year campaigning against female genital mutilation (FGM) in Iraqi Kurdistan and many countries in the Middle East and Asia, WADI has to announce that large parts of the campaign will not continue.

As of now, it was not possible to secure funding for the six mobile teams operating in Kurdistan. The teams which consist each of two women and a driver visit villages and town halls, talk to religious leaders and organize film showings. They address FGM and issues of domestic violence, they are counselors and mediators in conflict situations. With funding from UNICEF it was possible during the last two years to increase the number of teams, thereby reaching out to all parts of the autonomous region of Kurdistan and Kirkuk. Only recently, a campaign to raise awareness among men has started.

However, UNICEF is suffering from donor fatigue and will not be able to sustain its contribution. Other donors, neither the EU, nor individual European countries, will jump in. One reason is a shift of focus in the region. With multiple wars waging funds are directed to projects preventing violent extremism. Protecting women does not fall into this category.

Surveys: Do it yourself

So far the bad news. The good news are fortunately plentiful.

With the support of the Wallace Global Fund, WADIs Stop FGM in the Middle East & Asia Campaign is launching an FGM Survey-Tool 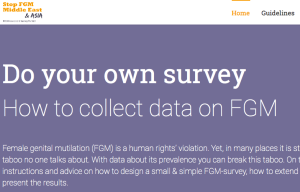 In the Middle East and South East Asia FGM is often not recognized as a problem simply because no data exists. From individual accounts and hear-say high prevalence can be assumed in places like Southern Thailand or among the Muslim population of Singapore. Little is known about the Maledives, Sri Lanka, Brunei and the Philippines – only that it is practiced is for sure. Many women rights activists have asked WADI in recent years to assist them in conducting small surveys in their countries to start a discussion.

Now, we decided to make our assistance for such surveys easier to access and available to everybody. A step-by-step online guide in four languages explains what is important before starting a survey, how to conduct interviews and how to do the calculations. Several ready-made questionnaires are available for print out and can be easily adjusted to local needs. Please check www.fgm-survey-tool.net and link to it from your website.

The region where surveys are most needed is South and South East Asia. Therefore, WADI organized together with AWARE in Singapore a regional meeting in January on FGM with a special focus on surveying. Participants came from India, Malaysia, Thailand and Singapore.

A survey has been started recently by the Indian group Sahiyo among the Dawoodi Bohra community. Another one is carried out in Singapore, initiated by WADI together with local activists. From Iran, we have a detailed description now about the practice in Minab in Hormozgan, also based on a survey. Read about “Female Genital Mutilation Footmark in South Iran” here.

The recently founded group “Sahiyo (meaning “friends”) – United against Female Genital Cutting” is tackling the issue of FGM within the Dawoodi Bohra community in India and abroad. On the International Day of Zero Tolerance they are launching their campaign ‘Each One Reach One’. They state: “The campaign aims to erase the secrecy around female circumcision and generate a healthy dialogue about it.” They call on everyone who knows of the trauma and health risks FGM entails to talk to one person within the community and tell them what they think about it. This month-long campaign will extend up to March 8, which is celebrated as International Women’s Day.

Also on the occasion of International Day of Zero Tolerance, women activists in Singapore have started a blog series on FGM on the blog “Beyond the Hijab”. It started with the entry “Let’s talk about Sunat Perempuam” on Febuary 2nd and will run until Saturday February 6th.

In Suleymaniah, Iraqi-Kurdistan, WADI will hold an afternoon event in the format of our “Culture Café” where members of our mobile teams will present their work and progress in different regions.

By hannahcaroline36 in News, Press Statement on 2016/02/06.
← United Nations Population Fund: Speaking out against female genital mutilation in Indonesia FGM: Slow progress when talking to the UN about numbers →