11.8.2016. By Stop FGM Middle East. A recent survey among Sunni religous scholars in the Iranian province of Kermansheh shows that a majority of them (67%) believe that “female circumcision” is religiously obligatory or at least recommended for girls and women. In this province in the West of Iran, female genital mutilation (FGM) is practiced by Sunni Kurds who adhere to the Shafi’i law school. Many of them believe that Islam commands them to have their girls cut. 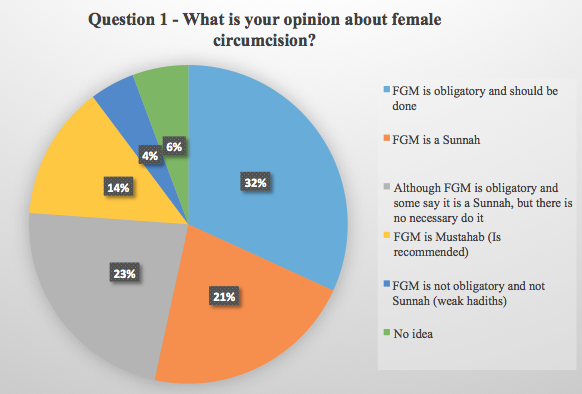 In recent years, the issue of FGM has been raised in Iran by a number of activists through media (radio and internet) and a conference in Teheran. In the province of Kermansheh regular lectures for parents and couples were held and information material warning of negative effacts was distributed. Furthermore, educational programs in Iraqi Kurdish media (TV and radio) about FGM also reach an audience in the Kurdish speaking communities in Iran.

There is good reason to believe that these campaigns have let to a change in attitudes among the population towards FGM. Rates have dropped from 31% in 2010 to 18% in 2014 in the province of Kermansheh, according to a comprehensive study on FGM by Kamel Ahmady.

Yet, even tough educational programs have an effect on people’s attitutes, religious opinions (fatwas) play an important role as well. In reaction to the campaigns against FGM, a number of mullahs have voiced their opinion against FGM while others defended the practice. However, it was not at all clear which opinion the majority of mullahs tends to.

Now, the Hamraz counseling center of Javanrood (Kermansheh, Iran) has conducted a survey among 81 religious leaders and asked them about their opinion on FGM.

The results show that FGM is still justified by a majority of mullahs as a religious deed. Only a small minority of 4% believed that it is not an Islamic practice (not Sunna). The vast majority stated that it is Islamic. More than a third (35%) sees it as recommended or Sunna (the right path), but do not call it an obligation. Yet, almost as many (32%) say it must be done. To substantiate this view, a number of Hadiths (accounts of the prophet’s life and sayings) are referred to and a small number of mullahs even falsely believes that the Holy Quran itself calls for female genital cutting.

However, there is also a highly ambiguous group of 23% who take the seemingly contradicting position of calling it obligatory and Sunna, but say it is not necessary in their opinion. The author of the study, Osman Mahmoudi, interprets this “as a sign of change within the religious establishment or a reaction towards changing opinions in society.”

Mahmoudi points out, that “on the other hand, knowledge of negative consequences exists.” A majority (54%) have heard of different negative effects like psychological problems, infections and marital problems. He concludes that “awareness campaigns have at least partly reached their audience. This is also shown by the answers to question 7 where 34% answered that the decrease of FGM is due to awareness raising through media and research.”

He finds this contradiction highly alerting: “The results imply, that one and the same mullah may know about negative health effects and still defend the practice as a religiously good deed.”

Yet, the mullahs distance themselves from modern science as is shown by the results of question 6 where 46% chose one of the answers which prioritize religion over scientific research and medical studies. “Only 19% take the position that FGM should not be done if doctors and psychologists show that it leads to complications.”

The study concludes “that education about negative health effects of FGM does not lead to a rejection of the practice if strong religious beliefs stand in the way. Medical studies seem to be rejected by a vast majority of mullahs if they contradict their religious believes, thus scientific results are simply not believed.”

By hannahcaroline36 in News, Project Updates on 2016/08/11.
← How a religious ruling seems to have stopped FGM in the 1950s in Ahwaz, Iran Short film: Razor and Tradition →