International Day of Zero Tolerance for FGM in the Kurdistan Parliament

11.2.2015. Wadi, UNICEF and the High Councild of Women affairs launched an event about how to eliminate FGM in Kurdistan and Iraq

To mark February 6, the International Day of Zero Tolerance for Female Genital Mutilation, With support from UNICEF as part of Combat FGM In Iraq WADI, alongside the Women’s Affairs Committee of the Iraqi Kurdistan Parliament arranged an event on February 8.

Held at one of the conference rooms of the Kurdistan Parliament in the region’s capital, Erbil (Hewler). The event was attended by more than 70 people consisting of members of parliament, former ministers, activists, politicians, journalists and professionals working to combatting FGM. In addition, over 20 media outlets participated, including 9 TV channels, numerous newspapers, both online and in print. 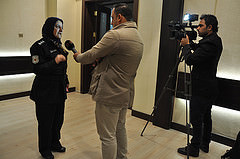 A female police officer explaining about the police’s role in combatting domestic violence. Police trainings are organized by WADI and Unicef.

The featured speakers discussed causes leading to FGM and the efforts made in Kurdistan to eradicate the practice. Among the speakers were the head of the Women’s Committee of the Kurdistan Parliament, Evar Ibrahim, a member of the High Council of Women’s Affairs of the Kurdistan government, UNICEF Iraq, the project coordinator of WADI in Iraq, and an activist from Iran who has written a book about FGM in the country. All of the participants agreed that more effort is needed to reduce the rate of FGM in Kurdistan.

As there were a number parliamentarians present at the event, it was crucial to obtain their views both on the law prohibiting FGM and how to effectively eradicate the practice in Kurdistan. Most participants showed enthusiasm for this event as they felt the topic of FGM has rarely been discussed in parliament. Representatives for UNICEF Iraq expressed their commitment to combat FGM within any society and underlined that working to reduce and eliminate FGM is an important, though difficult, battle. 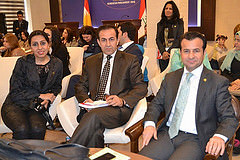 Falah Muradkhan, project coordinator for WADI in Iraq, presented WADI’s collaboration with UNICEF, which entails combating FGM in Kurdistan including Kirkuk. Mr. Muradkhan also presented the various partner organizations that work with WADI and UNICEF through sending teams to rural areas to raise awareness about FGM. In addition, Mr. Muradkhan mentioned the current rates of FGM and the ones found during WADI’s earlier work.

Rayehe Mozafarian, an activist from Iran briefed the audience about her research on FGM in Iran. Ms. Mozafarian stated that FGM is practiced in Iran, both in Iranian Kurdistan and in the south of Iran. Her book, based on her own research, has recently been published in Iran and is raising awareness about the practice.

WADI also presented the four TV spots it has produced as part of the UNICEF-WADI collaboration to combat FGM. 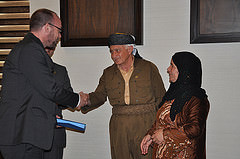 Lastly, WADI took this occasion to recognize some of its partners in the fight against FGM. UNICEF was presented with an award to honor their tireless effort to support those that combat FGM in Kurdistan. Serhed Ajib, the village representative of Tutaqal, one of WADI’s Free-FGM villages, and his wife presented the award.

The second award of the event went to Zito Siany, Human Rights officer at UNAMI, for his activism against FGM, which has spanned over a decade.

By hannahcaroline36 in News, Press Statement on 2015/02/11.
← Day of Zero Tolerance to FGM: We need more campaigns in Asia New publication about FGM in Persian →