A new study about psychological and psycho-physical consequences of female genital mutilation (FGM) in Iran found that FGM has negative effects for both wife and husband. The study “Couples Victim of FGM” brings a new aspect into the discussion about consequences of FGM because men have so far not been an object of empirical research in connection with FGM. As concluded by the psychologist and researcher Osman Mahmoudi, husbands married to women who have undergone FGM suffer from sexual dysfunction, marital dissatisfaction and have a lower level of mental health. 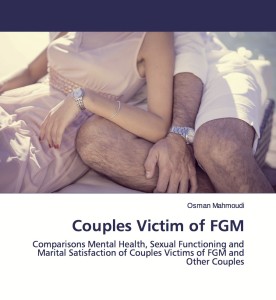 Mahmoudi, who is running a family counseling center in Javanrod, a city in the Iranian province of Kermansheh, has interviewed 414 couples in this region with his team. The wives in 206 couples had undergone FGM, while in the comparison group of 208 couples, wives had not undergone FGM.

In line with other studies, Mahmoudi found that sexual function and mental health of women who had undergone FGM was lower than in the comparison group.

Both husband and wife were suffering more often from fear, paranoid thoughts, psychotic thoughts, depression, anxiety, obsessive-compulsive tendencies and feelings of inferiority than the men and women in the non-FGM comparison group.

This was the same in regards to sexual function. Men and women in the group with FGM had significantly lower scores on the items psychological arousal, physiologic arousal, ease of orgasm and orgasm satisfaction. The comparison of average scores indicated that couples with FGM scored worse in all sub-scales, except sex drive than the Non- FGM group.

Men are unhappy with their sexual performance

One explanation for the negative effects of FGM on men, according of Mahmoudi can be the general importance of a fulfilled sex life for marriage but also feelings of inferioty on the side of the husband: „When husbands see their wives’ sexual dissatisfaction, they may believe that they are the cause and become depressed and disappointed and their confidence comes down.”

“Even if husbands of circumcised women reach an orgasm, they may be psychologically disturbed if they see that their wife does not reach an orgasm and they will be unhappy with their sexual performance.“

Osman also stresses: „One reason for FGM in patriarchal societies is to control women’s sexual desire, but FGM has no impact on sexual desire, conversely, it has a significant impact on achieving sexual pleasure.“

The results of the study could have a significant impact in Islamic societies where the right to sexual pleasure for both men and women is acknowledged, but all too often only understood as a men’s right. If it is recognized that sexual pleasure of men is negatively affected and in fact, apart from FGM, sexual pleasure is always a mutual experience this could change the perception and religious doctrine in many places where FGM is still defended.

The study was supported by the Stop FGM Middle East campaign and can be purchased at morebooks.com

By hannahcaroline36 in News, Project Updates on 2015/10/09.
← Cutting the clitoris: Indonesia continues practice to prevent women from having sex Independent: Isis may have issued a fatwa introducing FGM in Mosul – but cutting in the Middle East is not new →