19.2.2015. The Persian program of the German Deutsche Welle recently aired a program about FGM in Iran. In the following we document parts of it (we did not translate some of the general explanations about FGM worldwide):

„The results of a survey show that 83% of women on the island Qeschm and 50% of women in Iranian Kurdistan are mutilated. The researchers are convinced that such practices are also prevalent in other parts of the country. 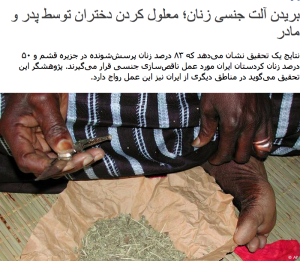 According to the World Health Organization (WHO) 140 million women worldwide are victim to female genital mutilation (FGM). 28 countries in Africa and in Asia Irak, Iran, Sri Lanka, Singapore, Malaysia, Indonesia, the Philippines, countries on the Persian Gulf, Saudi Arabia, India are countries where women are mutilated.

Even in Germany until now 30.000 women were mutilated and another 5000 are at risk of being mutilated.

Rayehe Mozafarian has published in 2014 her research about FGM in Iran in a book with the title „Razor and Tradition“. This book did not get permission to get published in the era of Ahmadinejad and only the Nakoja publishing house published it on the internet. In the Rohani era the ministry of culture allowed the publication and now it will be available in book stores starting Febuary 6, the international day of zero tolerance towards FGM.

Mozafarian says that this book is actually the result of a survey among 400 women in the island of Qeschm, surveys in Ilam, Kermansheh, Sananday and the Southern regions of West Azerbaijan. In addition other research and thesises were looked at closely. The research on the island of Qeshm were done in a hospital where the women were patients.

The results show that FGM in Iran is most widespread in Qeshm. 83% of questioned women were mutilated and 60% affirmed that they would do the same to their daughters. In the Kurdish regions this number is between 50 and 70%. Mozafarian points out that the situation in Kurdistan is different from other provinces because each region deals differently with FGM. Maybe one village does not practice it at all while five kilometers away in the next village the women are mutilated. For this reason, it is impossible to state exact facts and numbers.

According to Mozafarian only Type I FGM is practiced in Iran, meaning the removal of parts of the clitoris. But she was informed that last month a girl had also undergone type 2 or 3.

The Fatwas of Iranian Mullahs

Rayehe Mozafarian has met during her research in 2009 with a couple of Grand Ayatollahs. Among these only Grand Ayatollah Sistani allowed FGM. But after the takeover of parts of Iraq by ISISI and their issuing of a fatwa requiring FGM, Sistani has changed his fatwa saying that FGM is haram (prohibited).

Makarem Schirazi and Sanei have issued a Fatwa prohibiting FGM. Ayatollah Chamenei answered in 2009 to Mozafarian question about FGM: This deed is allowed but not obligatory and it depends on the situation.

After a few years in which more information about FGM was distributed the official website of Chamenei has changed this Fatwa and added: „Because FGM is not a custom or social norm today, it is better if this deed does not happen like many other customs which have disappeared.“

But after this sentence he answered the question of a believer on the website: „In case the husband demands his wife to be circumsiced, what should the woman do? Chamenei answers: „In case this deed does not harm the women, she should obey her husband.“

What does the law provide?

According to paragraph 663 of the Islamic penal code the cutting or severing of a woman’s genital organs must be paid for by half the compensation for a woman. In this law there is no difference between virgins and non-virgins, minors or adults, healthy or victims with severe health consequences like that of a woman whose vagina and urethra became one.

Based on this law a woman can sue the person who mutilated her. But as Mozafarian says, this is impossible, because girls are mutilated as minors and in case they want to sue the perpetrator they need to wait until they are 18 to sue their parents or a midwife which is usually also a friend or relative. That basically never happens.

The fight against FGM in Iraqi Kurdistan was started 10 years ago. According to Mozafarian NGOs have conducted surveys in the beginning.

Their attempts were focused on one point. Because FGM always happened in the name of religion in this region, they wanted to show that nowhere in the Quran or Hadith FGM is allowed. A few years ago these attempts bore fruits and the president with help of the parliament prohibited FGM.* Recently four videos about four different perspectives on FGM were produced and are shown on television.

According to Mozafarian the success of Kurdistan in its struggle against FGM in Asia is unique and therefore many international organizations concentrating on Africa before now also pay attention to Asia.

* Note by FGM Middle East: In fact it was the other way round: The parliament passed this law and the president at first even refrained from signing under the pressure of conservative religious groups. But since he didn’t stop it it took effect under the Iraqi Kurdish constitution even without his signature.

By hannahcaroline36 in News, Press Review on 2015/02/19.
← New publication about FGM in Persian Vice: Female Circumcision Is Becoming More Popular in Malaysia →