FGM Change conference: Some thoughts on numbers and religion

28.1.2015. by Hannah Wettig (Stop FGM Middle East). One and a half hours into this European FGM conference organized by Terre des Femmes in Berlin, I know we have a lot of challenges in front of us. I haven’t heard the word “Asia” yet, but more than a dozen times “Africa”. This could just be due to the topic of this conference: “Promoting Change towards the abandonment of FGM in Practicing Communities across the EU” which sounds more universal than it is. It is actually about the change agent project supported by the European Union’s Daphne Program. Change agents are people from migrant communities who are promoting the abandonment of FGM within their communities. The designers of the project selected 17 countries where migrants from “practicing communities” come from – or at least this is what I heard on the conference, I can’t find it on the web later on. It seems like all of these 17 are in Africa. 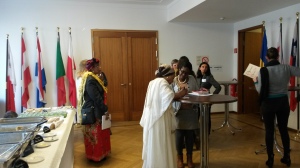 But still, with all these FGM experts around they could at least mention Asia, couldn’t they? Well, the actress Nina Hoss says in her opening address: “FGM is not just an African problem, it is a global problem.” I suppose that is about correct, even though I wonder if people understand it the same way I do.

Later on, I am pretty sure it is not understood the same way or maybe people just can’t add up numbers? The number mentioned here a lot is 125 million. This is the number which Unicef published in their statistical overview of FGM in the world (actually now it says 130 million, but it did say 125 million in press releases). It is the number of FGM victims in those 29 countries where very special kinds of surveys (domestic household and MICS) included questions about FGM. It is not the number of women and girls who are victims of FGM worldwide. Unicef itself puts the worldwide estimate at 140 million, yet also Unicef doesn’t have all Asian countries where it is practiced on their list.

Yet, on this conference everybody who uses this number says it is the worldwide number. So, I sadly realize that all those Asian victims we have been trying to give a voice are still not counted.

On the first panel, the panelists are pretty concerned with religion, or that is to say: They are making a strong point that FGM has nothing to do with religion. Again, I assume that they simply have never heard about FGM in Asia where the connection between FGM and religion can’t be denied. Maybe they come from countries where there really is no connection.

But then the same woman who so strongly stressed there was absolutely no connection to religion says that people practice FGM because they think it is Sunna. That’s a pretty interesting statement. There are different interpretations of what exactly Sunna means, some say it is the right path for a Muslim, some say it is just the way things were at the prophet’s time. The later not being a neutral description at least for Islamists who believe that the prophet’s time was the perfect time and people should go back to it – so in this sense the second interpretation means the same as the first. But in any case, there can be no doubt that Sunna is a religious term. How can there be no connection with religion then?

I don’t get to ask that question because there is no time for dissussion. On the next panel, change agents, one man and three women are talking about what they are doing. We learn that men are an important pillar in this program. Later on, it is stressed that this is a new approach and that some of the partner organizations had to relearn because they were used to only working with women. It sounds like this change program is really quite good.

Finally, I get to ask my question about religion. I sketch up the results of studies from Oman to Indonesia, our experiences in Iraq and then ask the change agent who is responsible for the Somali community in the Netherlands, what role religion plays in her work, because I know that the Shafi’i law school is dominant in Somalia. The Shafi’i say “female circumcision” is a religious duty. She affirms that religious men of the Somali community say that women must do FGM. She talks more about Dutch laws and different approaches. Only in the end does she come back to the topic saying “We need religious men and especially religious women to say something against FGM.” It sounds like this is something they haven’t been able to tackle yet, but would like to.

When Anja Stuckert from Plan International gives her presentation, religion ranges not among the neglectable issues. On two of three levels it plays the most important role according to her slide. It reads: “Individual level: Kitchen Talks on FGM and religion” and “Community level: Engage religious leaders”.

The Professor for Gynocology Christopher Zerm picks this up and adds to his list of key professionals the religious leaders in his presentation. Wow, quick change of discourse!

Later, I gather another puzzling statement: “They say they do it because of religion but if you look under the surface it is not at all religious.” I would like to ask what definition of religion this statement is based on. A certainly different definiton I have already stated shortly when asking the Somali change agent: “After all religion is not some ideal vision we have. Religion is what people believe.”

On a last note, it must be said that Terre des Femmes belongs to those few NGOs which stress that FGM is also practiced widely in Asia.

By hannahcaroline36 in News, Press Statement on 2015/01/28.
← Middle East Online: Egypt doctor gets 2 years in jail for fatal female circumcision HRW: Yemen: No Justice for Past Abuses →