In the hamlet of Tirpaspyan, a loudspeaker crackles into life, summoning the local women to the village mosque. END_OF_DOCUMENT_TOKEN_TO_BE_REPLACED

28.2.2016. Just 20 years ago, female genital mutilation was an accepted practice in six Bedouin tribes in southern Israel. Jewish researchers couldn’t figure out why the practice disappeared — because they didn’t talk to the Arab women’s group fighting it.

Half a century ago, one didn’t need to go all the way to Kenya to research the phenomenon of Female Genital Mutilation (FGM): you could do so in Israel. The practice was common among some of the Bedouin population in the Negev, and this was 40 years after the majority became Israeli citizens. END_OF_DOCUMENT_TOKEN_TO_BE_REPLACED

Now This: Up to 72% of Kurdish Women in Iraq suffer female genital mutilation 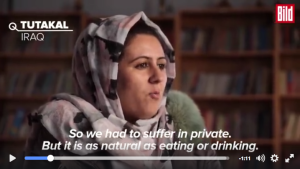 Uncut Voices: FGM where you wouldn’t expect to find it – in IRAN

6.2.2016. by Uncut Voices. When Kameel Ahmady, an aid worker in Africa, encountered FGM, he was at first unsuspecting of the discovery that awaited him on return to his native Iran. Yes, he knew ‘circumcision’ of girls took place in his country, but the secret had been so well-kept that he “was shocked to discover [it among] the closest members of [his] own family.”1 END_OF_DOCUMENT_TOKEN_TO_BE_REPLACED

JAKARTA, Indonesia – “The day before I was discharged by the midwife, my daughter was circumcised. She is now three weeks old. When she becomes an adult, she will pray five times a day and read the Al Quran,” says Rosa, a young woman living in Jakarta, before expressing a common misconception in the country. “According to religion, an uncircumcised girl is considered dirty.”  END_OF_DOCUMENT_TOKEN_TO_BE_REPLACED

4.2.2016. Women from Dawoodi Bohra community have petitioned the government to ban the medieval and unscientific practice of female genital mutilation.

Beyond the Hijab: Let’s Talk About “Sunat Perempuan”

2.2.2016. On the occasion of International Day of Zero Tolerance towards FGM, women activists in Singapore have started a series on “sunat perempuan” on their blog “Beyond the Hijab”.  This is the first entry which also talks about the workshop and regional meeting WADI and AWARE orgnized together in Singapore. END_OF_DOCUMENT_TOKEN_TO_BE_REPLACED

Unicef: Abandoning female genital mutilation, one village at a time

MURTKA, Iraq, 26 January 2016 — They remembered the day they were cut as if it was yesterday. Most said it happened around the age of five or six. To them, it’s the day they lost their trust in the person who brought them into this world — their mothers. END_OF_DOCUMENT_TOKEN_TO_BE_REPLACED

Petition to End FGM in India

At the age of seven, I was subjected to Female Genital Mutilation (FGM) in Mumbai, in a most unhygienic and clandestine manner. The shock and trauma of that day are still with me.

Like me, there are thousands of my Dawoodi Bohra sisters who have been subjected to genital cutting as children and even today thousands of Bohra girls are being subjected to this practice, since it has been ordained by the clergy of our community. END_OF_DOCUMENT_TOKEN_TO_BE_REPLACED

While reading about female genital mutilation, most people picture an impoverished African country where such a heinous practice could only be carried out in cut-off, uneducated tribal areas, far away from “civilisation.” Never do we think that little girls go through this torture much closer to home, in India. But it is a reality for women of the predominantly Muslim Dawoodi Bohra community in Gujarat and Mumbai. The practice entails circumcision with a razor blade, without anaesthesia and is done on girls before they turn five. END_OF_DOCUMENT_TOKEN_TO_BE_REPLACED