On the 15th of November, the UK Government hosted the world’s experts on Female Genital Mutilation at an international conference. The keynote speech by the UK’s Home Secretary suggests a celebratory tone in acknowledging the successful reduction of FGM in Africa. Indeed, the UK in 2013 made the most generous commitment ever by a single donor to end FGM, with a focus on Africa, resulting in the successes we see now. While commendable, the primary focus on Africa is not new and has meant many other countries are largely ignored.

In 2008, the UK Border Agency published a list of countries where females are at-risk of being subjected to FGM. With only African countries listed, this was for them an African issue. Migrants from these countries could be subjected to investigations or interrogations by officials regarding FGM.

Among many experts, the dominant theory suggests FGM came from Africa thousands of years ago, was later adopted by some Islamic sects and spreads around the world through migration. In Britain, thousands of FGM cases among migrants are recorded each year although there is yet no successful prosecution and conviction.

But the reality is FGM is not just an African problem. The country with the largest number of FGM survivors and at-risk girls is not even African. It is Indonesia, the world’s most populous Muslim country.

As someone who spent nearly a decade travelling worldwide to investigate and research FGM, the truth about this human rights abuse is worse than you might imagine. I’ve found FGM in the cartel land of Mexico, Russian Caucasus, Peruvian Amazon, war zones in Iraq, cosmopolitan Singapore, and even suburban America. FGM, done for different reasons in each place, is a native practice in every continent, except Antarctica.

My work on FGM began almost by accident when I went to Iraq to train journalists and found the NGO Wadi trying to document FGM exists in Iraqi Kurdistan. The West, then still associating FGM with Africa, was shocked to learn of this.

In Iraq, I partnered with Wadi, and produced a few investigative documentaries for The Guardian and BBC that exposed the extent of this problem in Kurdistan. To their credit, the activists at Wadi played a major role in getting FGM outlawed in Kurdistan, and within a few short years, the majority of Kurdish Iraqis turned against FGM.

In 2013, I thought my job was done. But through Wadi, I met other activists working to end FGM. At first, they were the ones in countries adjacent to Iraq, specifically Iran, Saudi Arabia and Oman. I started interviewing them and eventually, I went further afield, first to Malaysia, then the Pattani region in Thailand, and to Singapore. In all these places, FGM is a taboo subject but through sheer determination I was able to talk to cutters, survivors and activists. In Singapore, I surveyed 116 Muslim women and 86 of them were FGM survivors.

Although I am British, I was born in Singapore and to my dismay, people there I have known most of my life are impacted by FGM. I even recorded video of medical staff in Singapore offering to cut my nonexistent British daughter.

In fact, in many parts of the world, FGM is found in medical settings, with parents erroneously thinking it would be ‘safer’ if done in a clinic. Two years ago a teenage girl died after undergoing FGM in an Egyptian clinic. 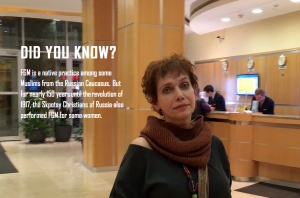 In a special report, I met and interviewed a gynaecologist in Dagestan, Russia who truly believes in the medical ‘benefits’ of FGM. In Detroit last year, doctors belonging to the Dawoodi-Bohra Muslim sect were arrested for performing FGM.

But this isn’t new; there is a long history of doctors performing FGM. In the mid-1800s, some British doctors recommended cutting the clitoris to cure many sicknesses. Dr. Isaac Baker Brown, the president of the Medical Society of London, published his 1866 treatise On the Curability of Certain Forms of Insanity, Epilepsy, Catalepsy, and Hysteria in Females, prescribing clitoridectomy for a number of illnesses.

These ideas took hold in the United States for a number of decades, well into the twentieth century. While American families would generally not talk about female genital cutting and the exact number of such operations is unknown, there is ample evidence that some white Christian women were subjected to FGM.

Together we released her story first at The Guardian and then later as the main subject in a short film, which won a prize on PBS’s To The Contrary and aired across the United States in late 2017. After the TV broadcast, a few white Christian FGM survivors contact us. Like Renee, all of them thought they were alone in having survived FGM, as they have never heard about it happening to any other white people they know.

In the Americas, FGM is not just in the United States. The Emberás of Panama and Colombia practice FGM. We would not have known about it had not the death of young girls from the cutting in 2007 caught the attention of the wider world.

As explained in an interview I conducted with an Emberá activist and with the UN in Colombia, they believed that cutting the clitoris would prevent it from becoming a penis. Furthermore, one prevailing theory is that African slaves bought the cutting tradition to the new world.

But I’m suspicious of this out-of-Africa theory and as I discovered, FGM is also found among many other tribes in Colombia. How could African slaves have influenced such a large area of the country? FGM is indigenous to South America and I found the proof in Amazonian Peru.

For centuries the Shipibo tribe had elaborate ceremonies celebrating the genital cutting of teenage girls. While these practices have stopped in recent years, the artefacts used for the cutting have been radiocarbon dated to a time before the arrival of Columbus. Meanwhile other South American tribes like the Secoya and Kaxinawá reportedly still practice FGM, and their remote locations make outreach and studies difficult.

Recently I have completed a feature length documentary by combining all the footage I have shot around the globe. But my research is incomplete; it will take many more people to comprehensively investigate and document FGM worldwide.

For example, I have heard a story that some Nahuas in Mexico cut the genitals of young girls. This remains to be proven. But in Juárez, Mexico for the last two decades, cartel serial killers kidnap young women and after sexual and genital mutilation, dump their bodies as a warning to others.

Hundreds if not thousands of women have been killed. Despite the arrests and convictions of the supposed killers, the femicide continues. On a recent visit to Juárez, I saw first hand how the missing women impact the psyche of the city.

After watching masked police officers patrol Juárez’s streets and seeing arrests on street corners in the ‘war on drugs’, I read that in many parts of Mexico, the authorities are accused of torturing arrested women with electric shocks to their genitals, which could cause burns which fit Type IV FGM. Clearly FGM is used to instil fear in the population.

Just a few years ago, FGM experts and friends felt my attempt to document FGM around the world was a fool’s errand. I can’t explain why I did it, as I never expected to come this far.

But I’ve learned this. While FGM is found across many ethnic groups and religions, with each assigning a different ‘reason’ for its practice, underneath their irrational explanations lie a universal mad urge to control the female body, sexuality and behaviour.

Formulating government policies to end FGM require knowledge of the facts and sadly, there is still so much the world doesn’t know about FGM. I suspect the UK will continue to focus primarily on ending FGM in Africa or where they might realistically achieve the best results. I simply can’t imagine the British Government stepping in to stop FGM in places like southern Iraq or even friendly countries such as Oman or Singapore.

But as I have also learned in northern Iraq, it takes individuals standing up to end this scourge. You could very well be situated close to someone affected by FGM. It takes all of us exposing FGM globally to end it.